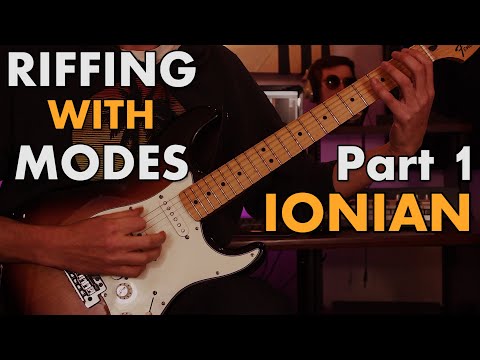 219 views
3 min read
Watch LaterRemove Cinema Mode
FacebookTwitterRedditPinterestEmail
I posted a video on how I wrote the solo (at 16:52) with tabs at my Patreon: https://bit.ly/35Ll3x1
Riffing with Modes part 2- Dorian Dad Rock:https://youtu.be/_r6ftqp1bkA
This is the first of a seven part series on how to write riffs. Every guitarist should be able to make a decent riff, and throughout these videos, I’ll be demonstrating the strategies and techniques I use to writing music on the guitar.
Each video will focus on a different mode of major, but will not always be totally limited to that key. In the case of this video, we perform a relative modulation by resolving to the vi chord for long enough to make it feel like our new tonal center. In future videos, we’ll build on the skills we learned before and explore new possibilities.
To fully understand this video you’ll want to know the following topics-
Major Scale + Chords: https://youtu.be/M8eItITv8QA
Seventh Chords: https://youtu.be/3JizNRwHYNY
Suspended Chords Pt 1: https://youtu.be/qu49nYaBfdM
FAKE GUITAR?????
This guitar solo was not easy for me, especially on my Strat. I had to practice it for several days and film it many times. I have about 40 minutes of footage of me failing to get it right, but I played it till II got a take that was good enough for me to post. All of the leads on my videos I film live so that the take you’re seeing is the take you’re hearing. I very very rarely make post-audio edits to my leads like fixing a bad bend or moving the timing of something, but if I do it’s always out of expediency. In this case I left it totally untouched with one exception- I slightly boosted the gain of the tapping section since it was noticeably quieter than the other parts. I hope you’ll afford me that luxury!
This video is brought to you by an incredible subsection of the human race known as MY PATREON SUBSCRIBERS. I owe them my thanks for their support, and so do you if you learned something from this video!
Special thanks to the following members: